Remember, do not forget!

In parashat Beshalach (Shemot 17) we read that Amalek attacked the Jews immediately after leaving Egypt:

8 The Amalekites came and attacked the Israelites at Rephidim.

Amalek resided in the area of today’s southern Jordan and in the Negev; how did they come to be so far west in the Sinai Peninsula?

What was their hurry to wage war on the Jews as soon as we left Egypt?

The Torah (Devarim 25,17-19) establishes the mitzva of remembering the atrocities that Amalek perpetrated on the Jewish people:

17 Remember what Amalek did to you along the way when you came out of Egypt.

18 When you were weary and worn, they met you on and attacked all who were lagging behind; they had no fear of God.

19 When HaShem will give you respite from all the enemies around you in the land He is giving you to possess as an inheritance, you shall blot out the name of Amalek from under heaven. Do not forget!

In last week’s parasha article, I quoted the Midrash that when it became known to Esav that Ya’akov had left for Charan, he dispatched his son Eliphaz (the father of Amalek) to murder Ya’akov. Eliphaz caught up with Ya’akov and was about to fulfill his father’s request when Ya’akov suggested that he take all of Ya’akov’s possessions, and in accordance with the reality of the time that “a destitute person is considered as dead,” Eliphaz would be credited with murdering Ya’akov. Eliphaz accepted Ya’akov’s offer.

It appears to me that there is more to their conversation than the simple statement that a poor person is as if he were dead. I suggest that the Midrash left out the essential element in Ya’akov’s discussion with Eliphaz. Ya’akov reminded Eliphaz that there is a family tradition that HaShem informed the patriarch Avraham that his descendants will be slaves and treated without pity in a foreign land for 400 years.

Ya’akov explained to Eliphaz that he should consider very carefully the implications of Ya’akov’s demise, because as long as Ya’akov is alive and will beget children the curse of foreign slavery will be upon Ya’akov’s descendants, but if Ya’akov will no longer be then the ones who will have to suffer the anguish of slavery for hundreds of years will be your (Eliphaz) children.

Eliphaz did not murder Ya’akov but went to report to Esav what had happened. Esav is fraught with anger when he learns that Ya’akov is still alive. Then Eliphaz points out to Esav that upon Ya’akov’s death the curse of slavery would fall on Esav’s own family.

Esav agrees that Ya’akov and the Jewish nation remain alive, but only until they serve out the years of slavery. At which time the descendants of Esav will murder the Jews. It then became an obsession in the family of Esav to remember and not forget that Ya’akov had “stolen” the birthright from Esav, so that when the Jewish nation will become free Amalek will pounce upon the descendants of Ya’akov in order to act on the memory engraved in the psyche of all of Esav’s descendants – to murder the Jews.

Amalek wasted no time when they learned that the Jews had left Egypt and made their way to the Sinai Peninsula.

The memories of Esav’s family was based on a fallacy; Ya’akov did not steal the birthright; Esav willingly renounced and abdicated his spiritual responsibilities. In order to offset the libelous memories of Esav, the Torah commands Ya’akov’s descendants to likewise remember what Amalek did to us, so when the opportunity will arise, we would be prepared to defend ourselves and live. Esav perpetuates his false memory and advances its murderous implications. Hence the Torah’s mitzva that we too remember and never forget the hate in the heart of Esav’s descendants and be ever prepared to defend ourselves. 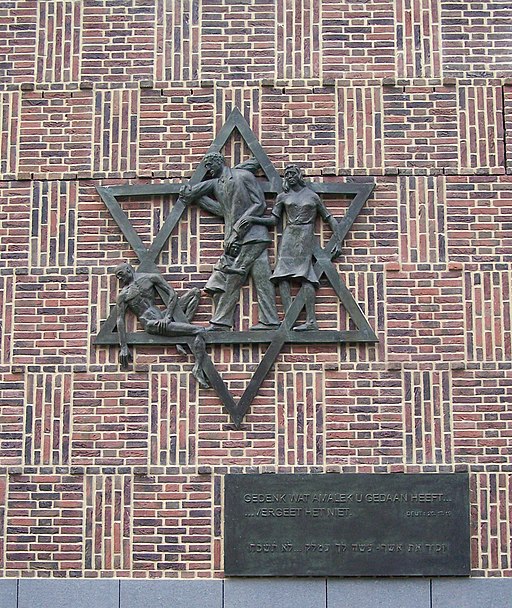 World War II memorial “Davidster” (Star of David) made by Dick Stins. Placed at the Marktstraat at the 12th of October 1967. The text at the side is in Dutch and Hebrew: Remember what Amalek has done to you…don’t forget (DEUT : 25.17.19′). The Marktstraat used to be the place of the former Jewish neighbourhood and synagogue. After a renovation of the street it was restored in 2007.

Now if one should ask: are the murderous memories of Esav still lingering today?

Answer: The next time you see a cross on a church or worn by a “believer,” stop and think for a moment what that symbol is saying to the Christian mind. The cross is the crucifixion, and its message – remember! do not forget what the children of Ya’akov did to the “savior”.

The memory inherent in the cross has sustained the hatred toward Jews for 2000 years. Esav and his grandson Amalek are very much alive, and will be so until the time when we will activate our “remember”:

17 Remember what Amalek did to you along the way when you came out of Egypt.

18 When you were weary and worn, they met you on and attacked all who were lagging behind; they had no fear of God.

19 When HaShem will give you respite from all the enemies around you in the land he is giving you to possess as an inheritance, you shall blot out the name of Amalek from under heaven. Do not forget!

And in the words of the prophet Ovadya in this week’s haftara:

On Mount Zion will be deliverance; it will be holy,

and the house of Ya’akov will possess his inheritance.

Ya’akov will be a fire and Yosef a flame; Esav will be stubble,

and they will set him on fire and destroy him.

There will be no survivors from Esav.”

Deliverers will go up on Mount Zion

to govern the mountains of Esav.

And the kingdom will be of HaShem.