The Wanderings of Jews

It is a mystery why and how “original” ideas just fall into one’s consciousness. Although it could be argued that every idea, as original as it might seem, is the byproduct of associations with previous ideas, ad infinitum.

This week’s essay came to my mind through four associations: Ya’akov’s impelled exit from his holy home and holy land; the appointment of a new director of Yad Vashem; the unbridled wedding of the Satmar Rebbe’s grandson clandestinely put together for thousands of Chassidim (with or without the knowledge of the mayor and police who need his friendship when elections come up), and the siyum of tractate Eruvin in the Daf haYomi.

Be forewarned that the end is not for the weak at heart.

Physical and Spiritual Wanderings in Galut

Parshiot Matot-Masei in the book of Bamidbar enumerates the 42 stations where the Jewish nation encamped in their 40 years of wandering in the desert. Some are well known, while others are just markers on a map.

Wandering is part of Jewish history in the galut, tracing its roots to Avraham and Ya’akov. It has had its drawbacks, to be sure. To have to leave the land in which you and your parents were born, in order to begin a new life in foreign surroundings, and with the knowledge that, in three or four generations, your descendants will have to leave for a new place is traumatic. Nevertheless, this situation also has held within it the survival of our people. The feeling that we were “permanently temporary” decreased the degree of assimilation into the cultures of our “host” countries. Some might argue that the “treatment” was much too harsh in combating the disease. Perhaps, but it worked until the “kiss of death” democracies of the western world.

Some of the places of our wanderings are well-known: Babylon, Rome, Madrid, Paris, London, New York. But some are remote and impossible to spell villages in Poland and the Ukraine, and equally difficult places to pronounce in Morocco and Yemen.

We wandered double speed on foot to escape the raw end of whips held by Spanish priests and paralyzing blows of Cossack murderers. The death marches, so skillfully conducted by the ever-orderly German army, made their ways from Poland back to Germany to escape the advancing Russian army.

The terrain we traversed was as varied as the very earth itself. We trekked through deserts, up steep mountains, across dangerous ice glaciers, under the glaring sun, and bedeviled by sub-zero cold. We did it all, and HaShem kept us alive to tell the tale of our tormentors who are no more.

The means of transport were also varied. Usually it was by foot and occasionally by horse or horse-driven wagon. The Russians used trains to transfer tens of thousands of Jews to Siberia. Rusty old cargo ships brought many back to Eretz Yisrael; that is, those which succeeded in running His Royal Majesty’s naval blockade. Jews from Yemen sat upon the “wings of silvery eagles” with four motors, whisking them back across 2500 years of history to Eretz Yisrael.

The wanderings of 40 years in the desert were a warning of what was awaiting us in the future; to wander over the face of the planet.

I mentioned that some of our wanderings were with trains. So, I want to tell you about two trains which serviced our people or, more precisely, two cars of two different trains.

The first car is on display at Yad Vashem here in Yerushalayim. If you didn’t know, you would even find the car sort of “quaint”, with its strange kind of roof and disproportionately large wheels. At second glance, it might strike you as being strange that it has no windows. The first time I saw it, I was reminded of a childhood story titled “The Little Engine That Could”. In stark contrast, the proper title for Yad Vashem’s car would be “The Little Car That Killed”. 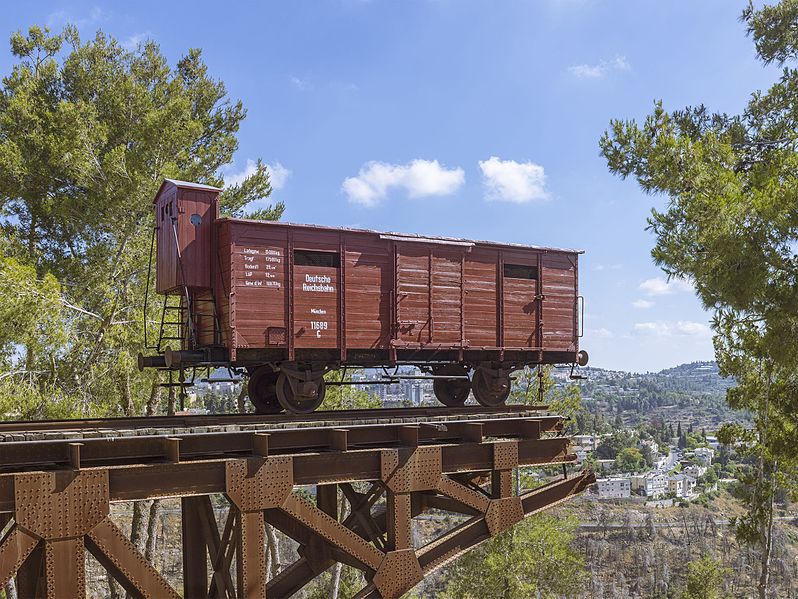 The Memorial to the Deportees was established at Yad Vashem as a monument to the millions of Jews herded onto cattle-cars and transported from all over Europe to the extermination camps.

If this car could speak, you would be deafened by the screams emanating from its slatted walls. You wouldn’t understand what the screams were saying anyway, because they were in a jumbled, muddled cacophony of different languages. However, if you tried hard enough, you would be able to discern the same words in many different accents: “Shema Yisrael HaShem Elokaynu HaShem Echad.”

This little car carried its human baggage on the Warsaw-Auschwitz route, when after dispensing its “baggage” returned to collect more fuel for the fires of Satan.

Now, not all trains are alike. Some spew out coal fumes, while others are electric-powered, clean machines. Some have comfortable seats with scenic windows, while others are no more than four walls astride a platform with heavy steel wheels. Some are for humans or to transport animals, but this “quaint” car built for animals was used to transport living Jews. The “passengers” were compressed together in a dense, congested, airless mass of torsos and arms and legs. An inescapable stench reeked from every corner.

As the train stopped in the picturesque villages of Galicia in southern Poland, the Jews inside who were still capable of standing would cry out to the locals for water who had gathered to see the now frequent sight of Jews “getting what they deserved for killing god”. The gawking goyim would taunt the Jews by lifting up their bottles and spilling the water on the ground.

The seats in this car are padded for ultimate comfort, and the car is air conditioned so the commuters can arrive fresh for another day of productive work. The seats are wide enough so that no one need trespass on his neighbor’s “territory”. Many of the passengers carry water bottles to prevent dehydration during the 45-minute ride to the city.

I myself have not had the zechut (merit) to see it, but was told, and with much pride, that the passengers do not speak to one another. It is not because they are unsocial. On the contrary, they are all good friends. It is because they are deeply immersed in the blue covered tomes that each one holds. This is one of the many “Daf Yomi” cars of many trains converging on New York City from all directions.

Two train cars, light years apart from each other in every way save for one; both are part of a holocaust which befell the Jewish people and is continuing to this very day.

Jews, ten times more than the number of words on an average page of the Gemara, intermarry daily in the United States and other places in the galut!

However, instead of drawing the obvious conclusion that the galut was, and forever will be, the death penalty for our sins, the leaders of our people look into the mirror images of their lives and, like the mythological Narcissus who fell in love with his own image, and say “How beautiful we are.”

Unfortunately, some people never learn, no matter how clear the indicators.

There is a very un-Jewish phrase, “Ignorance is bliss”. A takeoff of the words of Shlomo Hamalech in Kohelet 1,15)

For with much wisdom comes much sorrow, the more knowledge, the more grief.

Indeed, wisdom is often accompanied by loneliness, frustration, and sorrow; and knowledge brings with it grief; however, ignorance does not guarantee bliss.

The foolish and indeed ignorant conduct of the Satmar community in secretly conducting a lavish wedding at the time when the pandemic is taking its daily toll of human lives, and in violation of the local gentile law, shows that the wedding hosts and their guests have no knowledge or appreciation of the hard earned lessons of Jewish history in gentile lands. They are oblivious to the millions of Jews who have suffered at the hands of Esav and Yishmael.

With all their cleverness they ignore the simple fact that anti-Semites are like a box of matches; that as long as they are tucked away safely – they are harmless, but once you rub them in the wrong way they ignite and explode in your face.

It appears that people who arranged and attended this “simcha” will learn only when they find themselves having to take a train ride.

B careful B healthy B here