Ya’akov sets out for Lavan’s home to find a wife. Yet unlike Avraham’s servant Eliezer, who dozens of years before had arrived at that same well, with a caravan laden with wealth, Ya’akov arrives empty-handed.

Rashi (Bereishiet 29:11) explains that Ya’akov left home with great wealth. When it became known to Esav, he dispatched his son Eliphaz (Amalek’s father) to murder him. Eliphaz caught up with Ya’akov and was about to fulfill his father’s demand when Ya’akov suggested that instead, he take all of Ya’akov’s possessions. Then, in accordance with the principle that “a destitute person is considered as dead,” Eliphaz would be credited with murdering Ya’akov. Eliphaz accepted Ya’akov’s offer.

One can only imagine what transpired when Eliphaz informed his father how he had fulfilled his mission, Esav was livid over the fact that Ya’akov was still alive. Then Eliphaz explained the logic in what he had done: “Had I killed Ya’akov, your joy would have known no bounds. Yet for how long? A month? A year? Surely your euphoria would end, and your life would return to normal. But now Ya’akov is destitute, and will suffer every moment of his life. Whenever you sit down to eat, think about Ya’akov scrounging through the garbage dumps for a scrap of potato. And during the frozen nights, when you sit by the warm hearth, your brother Ya’akov will be freezing to death”.

At that moment Esav understood that he had succeeded in educating his son Eliphaz to hate Ya’akov, and he felt satisfaction from knowing that the hatred would pass on to Amalek, his grandson and onward to the end of time.

That sense of joy at having trampled every ounce of Ya’akov’s dignity explains Esav’s behavior in the following Parashat Vayishlach. The Torah says (Bereishiet 33:4), “Esau ran towards Ya’akov and he hugged him. Throwing himself on his (Ya’akov’s) shoulders, he kissed him”. Above the Hebrew word for “he kissed him,” vayishakehu, there are dots in a Torah scroll, alluding that there is something here worthy of examination.

Our sages say that Esav had intended to bite Ya’akov to death, but at the last moment he kissed him. What caused Esav to turn the bite into a kiss?

Our sages answer that all of Ya’akov’s family bowed down to Esav. At that moment, Esav felt euphoric over the appearance of Ya’akov and his entire entourage pressing their faces into the dust in total submission.

The precedent was etched into the psyche of Esav’s descendants. The pleasure from trampling Jewish dignity drove the death machines of Christianity, and passed along quickly to Yishmael’s descendants. The Germans could have liquidated the Jews of Europe more efficiently right where they lived, in Berlin, Paris, and Warsaw. Yet they preferred to close them off in ghettos, then to transport them in cattle cars to the death camps after days of hunger, thirst, and disease. To force them out of the cars with whips and ferocious dogs, carry out “scientific” experiments on their bodies, and in the end to throw them into the gas chambers and the crematoria. The trampling to death, initially of Jewish dignity followed by murder of their bodies!

It is impossible to assess the significance the State of Israel has in the thought processes of the descendants of Esav and Yishmael. The non-Jews can “forgive” the Jews for everything, but not for a descendant of Ya’akov flying an F-16 more effective than most other pilots on earth.

Today’s descendants of Esav and Yishmael are planning to destroy the State of Israel, whose very existence constitutes a dire threat to their religions.

We are singled out in the U.N. with an accusing finger, when we defend ourselves. They say, “Don’t build security walls! Don’t use helicopters! Don’t hurt innocents in Jenin!” Their goal is that the Arabs should be able to continue laying bombs in the marketplaces of Yerushalayim and Netanya. 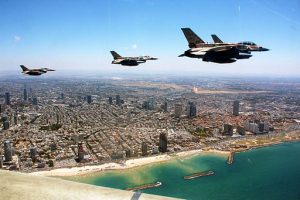 IAF “Sufa” planes, also known as F-16I, flying over the beaches of Tel-Aviv in honor of the country’s 63rd Independence Day. Photo by IDF, May 2011.

Our answer to all the “Esav”s in the world is Jewish pride.

HaShem has opened the graves of the Jewish People and brought to life the “dry bones” after two thousand years of suffering, not so that we can be the nations’ equals, but so that we can pave mankind’s way back to recognizing the Creator of the Universe.

Jewish pride means creating an ideal society under Torah rule. A nation of holiness in which all abide by the Torah, and fight to defend the people and the Land. A country in which every Jew walks with head held high, and where we never again will stoop to any human being.