An Israeli family was spending a year in the US teaching. They rented a house in a gentile neighborhood. 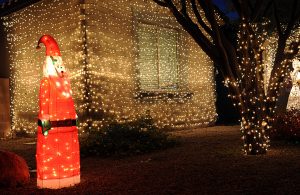 The flashy – and spriitually empty – lights of gentile nations

At Christmastime all the houses on the street were lit up with decorations, inside and out, flashing lights and colorful figures; while our Jewish family had a small chanukiah in their front window. Their young son asked his parents why they couldn’t have some impressive flashing electric lights, to which they answered that whenever possible the halacha requires only an oil candle, be it ever so modest!

The following night there was an electric outage in the entire neighborhood, and the only home that had any light was the Jewish one with the chanukiah in the window.

A cute story. However, it is the essence of the civilization that HaShem has created where the Jewish nation stands against the Esaus and Yishmaels of the world. The gentile empires put on an impressive historic showing; huge and powerful armies, vast areas of conquest, and a Reich that would last for 1000 years. However, each one in turn, from Egypt, Babylon, Persia, Greece, Rome, the Ottoman empire, the British empire, Nazi Germany, the Soviet Union, etc., were relegated to the refuse bin of history, while the light of Judaism continues to light up the darkness of lost civilizations.

The Valley of Dothan

Our parasha, Vayaishev, relates that Yosef was sent by his father to seek out his brothers in the city of Shechem, but was informed by a man (or angel) that they had moved on to the Valley of Dothan. When the brothers saw Yosef approaching, they threw him into a pit of serpents and scorpions, and he was sold to Yishmaelites, Midianites, and ultimately to Potiphar of Egypt.

Fast forward in time. The Mufti of Jerusalem, Haj Amin Al Husseini, spent the World War II years in Berlin with his mentor, Hitler. There the Mufti organized thousands of Moslems to join the Nazi forces, mostly in the Waffen SS.

In return the Mufti requested and received Hitler’s promise that when they would conquer “Palestine”, the Germans would construct a death camp to which all the Jews of the Middle East would be brought and then murdered.

The place they chose for the camp was none other than the Valley of Dothan!

Unknown to the Mufti and his sinister friends this was where the brothers had betrayed their brother Yosef.

By the grace of HaShem, German general Rommel’s troops were defeated at El Alamein in Egypt. The Germans never entered the holy land and the promised death camp was never built.

It is quite clear from our long relationship with the Holy One, Blessed Be He, that we Jews are like the blind groping in the dark, while HaShem protects us at every step to ensure that we do not make any fatal, irreversible mistakes. 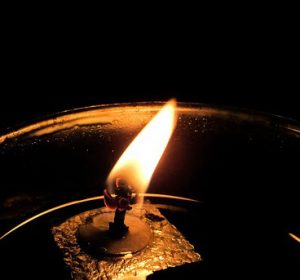 Yosef began as the young Hebrew slave against the entire Egyptian establishment. The Egyptians were at a loss at the pending seven years of famine, and in the end, it was the young Hebrew slave that reached the highest point in the social and governmental pyramid available to a commoner. The small modest Jewish candle again burned bright when the darkness filled the gentile night.

On Chanuka, the small militia of Mattityahu was pitted against the might of Greece. Again, our little lights of sanctity burned bright when the Greeks capitulated and were expelled from the holy land.

So too, the Reich that was to last for 1000 years and destroy the Jewish nation fell while the little light of the Jewish people continues to burn bright.

We are now witnessing the beginning of a confederation of nations that seeks to destroy the Jewish state; Syria, Iran, Turkey, and others who will follow. Goyim never learn that against the small candle of the Jewish people all the winds of the world, even all its hurricanes and tornadoes, cannot extinguish the everlasting flame of God’s chosen people.