The mitzva of Meshuach Milchama (the kohen anointed for war) relives the long history of warfare that was our lot since the earliest dawn of our nation.

Avraham formed an army of 318 soldiers when he attacked the four kings to save his nephew Lot.

Yaakov was prepared to fight, if need be, the 400 soldiers of his brother Aisav.

In our desert experience Moshe established an army under the command of Yehoshua who fought Amalek and others.

The 400-year Shoftim period saw many wars when the nation fought with armies on the tribal level.

Beginning with King Shaul, and during the following 400 plus years, the Jewish nation had a standing army when the Babylonians destroyed the first Temple and exiled our nation at the time of King Tzidkiyahu.

When Ezra and Nechemia established the Second Jewish Commonwealth 70 years later, it is recorded that as the workers labored to rebuild the walls of Yerushalayim and the Bet Hamikdash, they were protected by the naissant Jewish army.

The army functioned for the next 420 years when the Romans destroyed our second Temple and exiled our people at the time of King Agrippa II. 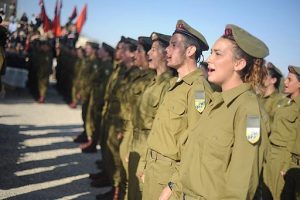 Countries the world over have armies. However, in Israel the army has a country, because every important decision takes into account its security implications.

We love our soldiers. The young people begin their private physical training while still in high school in preparation for army service. How great the disappointment when a youngster does not make the highly dangerous special units of Tzahal. Even more astounding, adults willingly report for reserve duty in great loyalty.

Notwithstanding the special place Israel’s army holds among its citizens, things could be better. Today our military is composed of an army of Jews, but it cannot be said that it is a Jewish army. Although among the basic bylaws of Tzahal, training is suspended on Shabbat and holidays, and a command to violate them is legally binding only under life-threatening conditions. In addition, kashrut is compulsory at all military installations, Yet, despite the army’s efforts to adhere to religious practices, there are halachic-based factors that warrant the statement that it is not yet a “Jewish” army.

The following is a depiction of how a Jewish army would look today.

1. In all Jewish wars, the Meshuach Milchamah dresses in the 8 garments of a Kohen Gadol and goes to the front lines to address the troops.

By his very appearance, the Meshuah Milchamah is sending a powerful message to the troops. Other armies fight for home and nation, but the Jewish army fights for the sanctification of the Holy Name. Despite their rhetoric, our enemies will continue to come against us because of our spiritual connection to the Creator. In their minds, vanquishing the Jewish army would prove that there is no Jewish god.

So, in a Jewish army every soldier would be aware that he represents all Jewish history and the Creator himself. The order of the day when going into battle is total victory with no mercy for the enemies of HaShem and his chosen people.

As Rashi states in our parasha (20,1) “Have no mercy on them for they would not have mercy on you”.

Let a thousand mothers of our enemies weep for their dead sons, but no one Jewish mother even have to worry over her son.

2. The army is no place for women, period. The army is a killing machine, whereas women are associated with the giving of life.

Not only is there no place for women in frontline units like Caracal or the newly established tank crews, but not even in benign office work as a soldier.

With that said, it is known that functions requiring multitasking and lengthy concentration are much more suitable for women. Women soldiers serve as the eyes and ears of the Medina as they use high-tech methods to search the land, sea and air for enemy infiltration. So how do we incorporate the unique skills of our women soldiers with the halacha?

Indeed, not one need be sent home. They can fulfill these exact functions, not as soldiers but as civilians on a contractual basis. They would dress in civilian clothing and not undergo basic weapons training.

3. Kashrut would be under the supervision of the army rabbinate and overseen by civilians or military supervisors. The standard would be high-end Mehadrin so that everyone could eat without question.

Any breach of conformity with the halacha would be severely punished.

4. The army rabbinate would be upgraded to include an ordained rabbi in every fighting unit – serving as one of the fighting troops and utilizing his rabbinic specialty only at times of need.

5. The army would consist of only observant men – the more erudite the better. The Gemara (Kedushim 76b) relates that the fighting troops of King David were the nation’s most outstanding young men – without physical or spiritual blemish, because victory is dependent on the spiritual merits of the fighters.

Of course, there are many more areas which would testify to the Torah’s presence in our army.

When the Mashiach reveals himself, the present yeshiva students will don the uniforms of our special forces and their seats in the bet midrash will be occupied by those who are presently uninformed of Torah and Halacha.