In Mount Zion there shall be Refuge

And HaShem said, I have indeed seen the misery of my people in Egypt and their cries because of their slave drivers, and I am concerned about their suffering. So, I have come down to rescue them from the hand of the Egyptians and to bring them up out of that land into a good and spacious land, a land flowing with milk and honey to the place the Canaanites, Hittites, Amorites, Perizzites, Hivites and Jebusites.

HaShem informs Moshe that the next stage in His Divine plan is to take the Jews out of Egyptian bondage and to bring them to Eretz Yisrael where they will coalesce into one unified nation under Him.

However, there is a major omission in HaShem’s message, where are the Torah and mitzvot? Indeed, the omission speaks louder than any articulated message. Torah in the Sinai Peninsula desert or in any other galut is no more than preparation for its actualization in Eretz Yisrael on a national scale.

Mount Sinai and the unprecedented revelation of the Torah to mortal man was a preparatory step for becoming HaShem’s chosen nation. A nation is defined by a particular geographical area (all sanctified areas and entities have defined lines, like the Mishkan and the Bet Hamikdash), and its citizens speak a common tongue and have shared ideals and a way of life.

This fundamental principle of Judaism has yet to be accepted by many spiritual leaders in the galut. It is tragic that, as they walk down the path of blunders, they continue to drag their innocent adherents with them.

As the galut is shutting down day by day, the Geula calls out to Rachel Imenu’s children to return home (ref: Yirmiyahu chapter 31).

Why the Shoah? And what are its lessons for our nation today?

An apparatus that grades the relative severity of calamities has yet to be invented, so we cannot know which catastrophe caused greater and more lasting damage to Am Yisrael – the 210-year enslavement in Egypt, the destruction of the two holy Temples or the Shoah. In actuality (except for research historians), it really does not matter because at the end of the day what is real is the grotesquely small number of Jews in the world today. It bears witness to what we have experienced in order to be HaShem’s chosen people. The accepted number of 15 million Jews is fake news. The true number is closer to 10 million, when half or more of the so-called 5-6 million Jews in the US are not halachically Jewish. The present 10 million Jews whose lineage began over 3500 years ago, pales before the fact that populations increase geometrically by 2, 4, 8, 16, 32, rather than arithmetically by 1, 2, 3, 4. If we had remained in our land, we would now be geometrically more than twice the population of China.

What a “coincidence” (defined as a direct act of HaShem while He remains anonymous) that, as we begin reading the book of Shemot detailing our enslavement and exodus, the issue of the Yad Vashem Memorial Museum comes to the fore. Avner Shalev, the Museum’s director for the past 30 years, is retiring; and the matter of the new director is gaining international interest. Efrayim “Effi” Eitam, former Knesset minister and Brigadier General – in addition to being a highly decorated soldier and religious Zionist patriot – has been nominated by the government as the next head of Yad Vashem. However, Mr. Eitam’s obvious religious appearance and right-wing orientation are disturbing to some vocal opponents here and in the galut.

Mr. Eitam will have to deal with two perplexing issues that Yad Vashem poses before the many who walk down the memory paths of German gas chambers and crematoria. I am certain that these issues were on the minds of our ancestors when they were being beaten by their Egyptian taskmasters. Where was HaShem? How did He let it happen? What is the message for the Jewish nation then and now?

I could easily answer these questions if I knew why Hashem created the material world with human beings filled with such evil in their hearts. However, since we cannot fathom the profound thoughts of the Creator, it is an exercise in futility to seek to understand the reasons behind life’s tragedies.

After having said the above, I humbly offer my personal thoughts concerning the Shoah (Holocaust) – thoughts that allow me to maintain some semblance of rationality in an irrational world. I have penned my ideas in previous essays; but the more I write about it, the more I understand what I was thinking.

Why the Shoah? And what are its lessons for our nation today?

The Shoah is the most barbarous calamity to befall the Jewish nation. Its devastation outranks even the destruction of the two Batei Hamikdash, as explained in Midrash Eicha 4 in its analysis of chap. 79 in Tehillim: “Mizmor Le’Asaf” (a song of praise [to HaShem] composed by Asaf [the Levi]). The Midrash points out that this introductory sentence is totally incompatible with the text, which deals with the projected destruction of the Bet Hamikdash. It should read “Kina Le’Asaf” (a lamentation composed by Asaf) and not “Mizmor le’Asaf” (a song of praise composed by Asaf).

The Midrash explains that the destruction of the first Bet Hamikdash was a calamity of the first order. However, even within the context of this punishment, HaShem showed His mercy by venting His anger on the wood and stones of the structure rather than permitting mass murder of His people.

So, the unescapable question: how did it come about in HaShem’s world that six million Jews, including one-and-a-half million children and millions of God-fearing Torah Jews, were sent to Olam Haba (the next world) through the chimneys of Esav’s death camps?

It would be flippant and irreverent to answer that the Shoah was punishment for their sins. Since all Jews are mutual guarantors (kol Yisrael arayvim ze la’ze), why was it only the Jews of Europe and parts of North Africa who suffered that fate, whereas the Jews of the U.S. and Eretz Yisrael were not only spared but also prospered.

The Gemara (Bava Kama 60a) explains the underlying meaning of the verse (Shemot 22:5):

If a fire spreads to weeds (in another’s field) and devours bales of wheat or uncut wheat or the field, the negligent perpetrator must make payment.

I reject any allegation that my Jewish brothers and sisters sinned to such a degree that justified the horrors of the Shoah. Some “experts” at counting other peoples’ sins place the blame on assimilation. However, never has Jewish history encountered the numbers and rate of assimilation and intermarriage found today among the Jews of the United States. Nevertheless, they continue to thrive. Other sin counters put the blame on Zionism, while others on the lack of Zionism.

The Jews were turned into smoke and soap because the leash on insanity was released, and the Jews were caught up in it BECAUSE WE WERE THERE! And we were there because we did not understand that when Esav kills Esav, it is no place for Ya’akov to be.

When the inhibitions of hatred are released, then the ever-present hatred toward Jews rises to the fore and Esav thirsts to put an end to Ya’akov.

If you reject the proposition that the two world wars were death sentences decreed on the goyim, and we were swept into it just because we were there, you are left with two very bad options: Either the Jews of Europe sinned to such an extent that 1,500,000 little children had to die, or the whole matter is so beyond our comprehension that we should just continue building bigger and more expensive holocaust museums and get back to living. 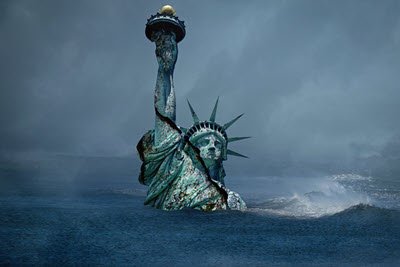 If a Jew lives in a depraved gentile society, then no matter how frum or how erudite in Torah, he might get swept up in the tsunamis and 9/11’s of that nation. The Jews of the Shoah were victims of the unbridled hatred of the Esavic Christians because we were there.

The people of the US are on the brink of civil discordance and anarchy which could quickly lead to civil war. There are many Blacks who would think nothing of fomenting a holocaust against the “privileged” Whites, and many Whites who would be happy to do so for the Blacks. But both sides would not hesitate to do so against the Jews who will be drawn into the strife because they are there.

The clear lesson echoing from the Shoah is that when Esav is battling Esav, it is no place for Jews to be.

In circumstances like these, it is every thinking person for himself. Once the genie of hate emerges from its bottle, there will be no way to return it to oblivion.

The prophets Yoel and Ovadya declared “In Mount Zion there shall be refuge”. 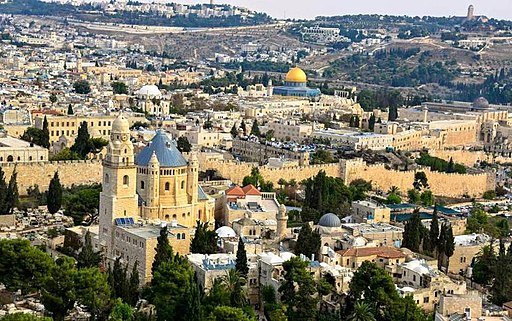 Jerusalem from the air, by the Israeli Police Airborne unit

Remember the three Bs: B careful B healthy B here