The Valley of Dotan, Near Shechem

This week’s parasha introduces the new generation of Am Yisrael to the calamitous City of Shechem. There they would participate in a ceremony marking the nation’s confirmation of being Hashem’s chosen people. Even though the confirmation was first done in chutz la’aretz in the Sinai desert, it had to be repeated in Eretz Yisrael, its predetermined natural habitat, because the confirmation in chutz la’aretz did not have the same spiritual energy as the holy land.

Our acquittance with the city of Shechem leaves a bitter taste. The Midrash (Pesikta Zutrata Bereishiet 33) describes the city and its environs as:

a place destined for catastrophe

It was there that Dina, daughter of Yaakov and Leah, was assaulted by one of the city’s most respected citizens. It was there that Yosef was sold by his brothers to Egypt, and where Yeravam ben Navat led the northern tribes in seceding from the Monarchy during the reign of King David’s grandson, Rechavam ben Shlomo. And it was that place where the greatest catastrophe to befall our nation was designed to occur.

A motion picture is composed of thousands of individual frames passing through the projector. The history of mankind also consists of a series of time frames of 70 years (“The span of our life is 70 years or with strength 80 years” – Tehilim 90:10). And just as one cannot understand the plot of a movie from a fleeting glance at a single frame, one cannot unravel HaShem’s intent in history from experiencing a single frame or even a thousand. 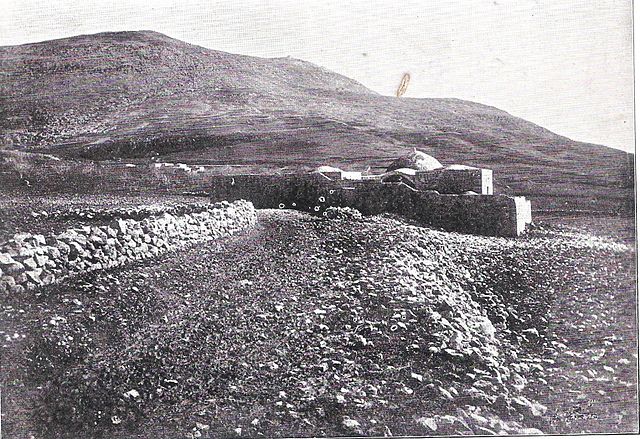 In parashat Vayaishev (Bereishiet 37,17) the Torah relates that Yosef met up with his brothers in the Valley of Dotan, near Shechem. After removing his many-colored cloak, nine brothers (excluding Yosef, Reuven, and Binyamin who was with Ya’akov at the time) initiated the betrayal of their brother. They lowered Yosef into a pit of snakes and scorpions, before selling him to Ishmaelites and Midianites.

On Yom Kippur, and Tish’a Be’Av we read the heartbreaking saga of the ten martyred rabbis, who were cruelly murdered by the Romans in lieu of the punishment deserved by Yosef’s brothers. The decree was verified when the angel Gavriel revealed it to the Kohen Gadol Rabbi Yishmael ben Elisha.

We weep over the fate that befell these great men and the implications it has had for the Jewish People. Yet, HaShem’s ways are mysterious. No one can fathom the intentions of the Creator; whose gaze encompasses all generations from Adam to the last man on earth.

The Mufti of Yerushalayim spent the years of World War II in Berlin, with his mentor Hitler. The two entered into an agreement: the Mufti would enroll thousands of Moslems from Bosnia and its related areas into the ranks of the S.S. In return, the Germans, after conquering Palestine, would construct a major death camp on the scale of Auschwitz, to which the Jews of the Middle East would be brought to be murdered.

However, HaShem had other plans.

In November 1942, General Rommel was defeated at the battle of El Alamein; Eretz Yisrael did not fall to the German Amalekites and the murderous plan for the Palestinian Auschwitz was averted.

The site earmarked for the camp was the very same Valley of Dotan. The place where Yosef was betrayed by his brothers and the Jewish descent to Egypt began.

Now the pieces fit together.

The death of the Ten Martyrs was an atonement for the sale of Yosef. However, the Mufti and Hitler could never have known that their deaths were sufficient to appease the demands of Midat HaDin (the Strict Quality of Justice). So, in our day, 2000 years later, calamity was averted in the Valley of Dotan.

The composers of the Yom Kippur liturgy included the saga of the martyred rabbis in the prayers with the moral lesson, that a sin left unrepented would not be forgiven even after thousands of years. And the myriad sins of the gentile nations would never be forgiven.

B careful, B healthy B here