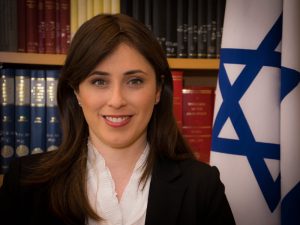 Our Deputy Foreign Minister Mrs. Tzipi Hotovely said in a television interview in the States, that American Jews “have quite convenient lives compared to those of Israelis”, so they do not understand the realities that Israelis face because most of them (American Jews) do not serve in the military.

Mrs. Hotovely also stated her understanding that the conflict over pluralistic prayer at the Kotel was fermented not for spiritual interests, but in order for the Reform leaders to gain recognition equal to Orthodox rabbis.

Mrs. Hotovely is a very intelligent, cultured and articulate representative of the Israeli government, and this prevents her from publicly analyzing the extent of the social and religious rift that exists between the Jews who have dedicated their lives to establish the State of Israel with all that that implies, and the Jews in the galut whose interests are personal and not aimed at the future survival of the Jewish nation.

I have no such inhibitions, hence am free to tell it “as it is”. As a preface, I must clarify that my criticism of the American Jewish community is aimed at the vast majority, but obviously not towards all. There are pure and righteous Orthodox Jews in the galut, who for reasons beyond their control cannot join us here in Eretz Yisrael, they are our soul brothers. The rest will have to answer to the Jewish God of history for their rejection of all that is holy in Judaism.

Danger of deviating from the covenant

That fact that the three angles of a triangle equal 180 degrees is an undisputed mathematical axiom. However, there is an even more dogmatic, and absolutely non-negotiable axiom, that states: HaShem brought the Jews out of Egyptian bondage in order to implement the covenant He had made with our forefathers which would be eternally binding on both sides. On HaShem’s side the intangible (for us) ever present obligation to love and protect the Jewish nation. On our side is the visible, tangible obligation upon the Jewish nation to uphold HaShem’s Torah in the Land HaShem had created, set aside and stipulated for that purpose – Eretz Yisrael.

This is the ultimate universal axiom which no Jew or gentile may deny without consequences. Any deviation or deflection on our part from the covenant, whether from the Halacha or abandonment of Eretz Yisrael, would be followed by harsh punishment, as stated in the Torah.

In order to emphasize the seriousness of the covenant, when the Jews refused to enter the land at the episode of the meraglim (scouts), HaShem sentenced all the males between 20 and 60 years of age of that generation to die in the desert.

The growing rift between Jews

The categorical arrangement of American Jewry into the Unaffiliated, the Reform, Conservative, Modern Orthodox and Ultra-Orthodox is fallacious. Based on the above axiom of Torah in Eretz Yisrael, there are only two categories of Jews in the world – the Orthodox who uphold the Torah in the holy land, and the Reform who pick and choose what is convenient in Judaism for them at that moment. The Orthodox uphold the Torah in Eretz Yisrael. Those who live in Eretz Yisrael but violate the Torah, as well as those who scrupulously keep the Torah but continue to cling to the galut with nary a thought of aliya are “Reform”. Hence there is essentially no difference between a Jew who discards Shabbat and Kashrut because the details are inconvenient, and a Jew with a long kaftan and shtreimel who finds it more convenient to live in Monsey or Lakewood and discards his obligation to live his life in the holy land of Eretz Yisrael.

Granted, there are degrees of Reform just as there are degrees of Orthodoxy. The Chassid with the shtreimel follows his spiritual leader who does not, God forbid, flaunt the Torah like the reform “rabbi,” but he very cleverly invents convolutions in the scriptures or Halachic writings to justify living the good life in the galut with a clean conscience. What unites all Jews in galut is the convenience of escaping the responsibilities of maintaining an independent Jewish State, with all that that implies: an army, the economy, development, taxation, medical services, international relationships, social integration, and so many sworn enemies on all our borders, and much more.

In galut, the goyim run the country and the Jews can reap the fruit by being good and loyal citizens.

Plain and simply put: the Jews in the galut have failed the challenges that HaShem has placed before our generation.

The rift between our two societies will grow ever wider. The majority of young American Jews are committed to liberalism and universalism that run counter to the basic tenet of Judaism, that the Creator has a chosen people – the Jews. This has become the religion of the young generation of American Jews. On the other extreme, last week in Monsey New York there was an anti-Israel army-draft demonstration by Chassidim. The entrance to the area was through a large gate over which was a horizontal sign that read “Tzahal Macht Frei” reminiscent of the sign in Auschwitz “Arbeit Macht Frei”. This is not a political statement, it is a statement of hatred. And if this is the attitude of religious Jews then what will be the attitude of those who are totally ignorant of their Judaism?

Is the prophet referring to our generation, when so many Jews side with the Arabs who wish to destroy Jewish Jerusalem?

In this week’s parasha Ya’akov makes great efforts to distance himself from his brother Esav who extended his hand in ‘friendship”. Because Ya’akov knew that the price of fraternal “togetherness” would wreak havoc on his insular family.

In any case, as far as we might have to distance ourselves, one thing is certain, when the Jews in the galut will be in dire straits, Medinat Yisrael will be only a phone call away.

Religious implications of the UN’s recognition of the Jewish State 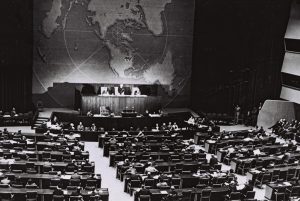 The UN votes on partition, November 29, 1947 (Courtesy of the Government Press Office, Jerusalem)

Today, the 29th of November, we commemorate the 70th anniversary of the historical vote of the UN at Lake Success, New York that recognized the establishment of a Jewish State in Eretz Yisrael.

The political ramifications are obvious. The Jewish people after 2000 years in exile will now have a State of our own recognized by the United Nations. We will be “captains of our fate”. We will open the gates of the land to all Jews who wish to come. We will have a “Jewish” army to cut down any enemy who would do us harm.

This was revolutionary. We, the Jewish people, have returned home, while there is not one person in the world who can claim that he is a descendant of the Romans who destroyed our Temple and sent us into galut.

However, the real story is the religious implications of the moment.

The nascent Zionist movement was challenged by most Chareidi rabbis. Their major opposition was based on a Gemara at the end of Tractate Ketuvot that states that HaShem made US vow that we would not revolt against the goyim in the lands of the galut and we would not initiate a crusade to conquer Eretz Yisrael. There was one more vow that HaShem demanded of the goyim, that they would not act cruelly towards the Jews in their lands – so much for a goishe vow.

The vote on the 29th of November 1947 left the vow that we may not return to the land by way of a military crusade null and void. THE NATIONS OF THE WORLD HAD INVITED THE JEWISH PEOPLE TO RETURN TO OUR ANCIENT HOME LAND. This has left the galut Chareidi leaders opposition to a Zionist state with no halachic or logical basis. The Satmar anti-Israel ideology, and the others who ride on their coat tails, are ideologically bankrupt. So, the question is, on what do they base their hatred of the Medina now?

The answer could be very embarrassing for them.