Chapters six to eight in the Book of Shoftim (Judges) record several episodes in the life of the judge Gideon from the tribe of Menashe.

Midianites, together with Amalekites and others, amassed an army of 35,000 men in the Valley of Yizre’el to make war on our nation. Gideon conscripted an army of 32,200 from the tribes of Menashe, Asher, Zevulun and Naftali.

HaShem appeared in a prophecy to Gideon saying that, since victory would be an indisputably miraculous event, the number of combatants to merit being part of the miracle must be reduced in order to release all the “dead wood” (any soldier preventing the miraculous events from happening). When Gideon informed the troops that anyone who wished was free to return home, 22,000 turned back. HaShem informed Gideon that even this number of remaining troops was unwieldy, because He works best in partnership with righteous people and when the Jewish people’s “back is to the wall.”

Gideon took his army to a riverbank as a test to see who would be worthy of continuing on to battle. While drinking, 300 soldiers brought the water up to their mouths with their hands, while 9700 got down on their knees like animals and lapped up the water. The latter were sent home, because a God-fearing Jew does not get down on his knees except in the Mishkan or Bet Hamikdash. The remaining 300 righteous soldiers were more amenable for HaShem to work with. 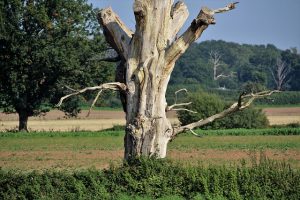 It appears to me that we are reliving the time of Gideon, when there is too much “dead wood” resisting and delaying our advance to the next stage of redemption.

I am not referring to the Jews in chutz la’aretz, who do not play a role regarding the future of Am Yisrael. There are two fundamental factors that determine an authentic Jew. The first is “emunah” (belief) that there is a first cause, a prime mover who created all that exists. The second is “bitachon” (trust) in HaShem’s promise made to our forefathers that He will protect and guard the people of Israel as a nation and as individuals. For the most part, observant Jews in the galut – including leading spiritual leaders – have a great degree of emunah that HaShem exists. They pray to Him and learn His Torah. However, they do not trust in HaShem’s promise to His chosen nation. They doubt if He will provide for their sustenance and protect them if they come to Eretz Yisrael. They believe that, in the galut, HaShem will provide them with parnasa, stability and tranquility; but why take a chance in the Promised Land?

As a consequence, the major thrust towards determining the future of Am Yisrael rests solely only on the shoulders of the Jews living in Medinat Yisrael. However, we are inundated with various groups of “dead wood” who are detrimental to our spiritual advancement:

Somewhere between a wish and a prediction, I submit the following:

HaShem is presently creating factors within and without the boundaries of our country which could evolve into great dangers and threats.

On paper, the situation will appear hopeless – much like the three weeks preceding the Six Day War when many Israelis left the country for fear of what might occur. We lived in Kiryat Zanz, a suburb of Netanya, and were witness to many families who ran away in dire fear. Those who did not possess a profound love for the country and faith in HaShem’s promise that He would save us, deserted the ship as fast as they could have their passports checked.

The hundreds of thousands of Russian non-Jews will return to points of origin. The Africans will go back across the borders from where they came illegally, and the leftist professors in our universities will find employment in the citadels of higher learning in Berlin and elsewhere. Many of the religious anti-Zionists will make a “beeline” for Belgium, France, the US and other exotic “safe” places.

Who will remain? The knitted kipot Zionists serving on the front line on the borders. The old established families of Zfat, Tiberias, Jerusalem and Hevron – such as the Rivlins, Liders and Kahanas – and some non-observant families with a fierce connection to Am Yisrael and Eretz Yisrael.

My message is plain and clear. Our enemies and their existential threats against us will gain momentum in the weeks and months ahead. Just keep in mind that we in Eretz Yisrael are the loyal survivors of 3500 years of challenging Jewish history. in addition to the Jews born here, HaShem has handpicked and brought here olim who possess the will and inner strength to overcome all obstacles. The past 150 generations of Jews are culminating in those who will remain in Eretz Yisrael at the time of the big test. Whatever will be, let us look in confidence and bitachon to the future and prepare for the most miraculous ride of our lives.

Notwithstanding my prediction, there still remains an alternative future scenario. All non-Jews living in Eretz Yisrael – including the 350,000 to 400,000 Russians, the 60,000 Africans and the millions of Arabs – will one day wake up and want to be Jews and undergo all the steps of conversion, including acceptance of the mitzvot. So, take your pick of what the future will hold; which alternative is most likely and which is less.

In any event, there will be dramatic changes in the lives of Jews the world over, and certainly here in HaShem’s promised land.

The greatest human experience is to be a Jew – born or converted, and a distinct privilege to live in this generation. May HaShem bless us with the ability to realize and appreciated the enormous role He has placed on our generation in Eretz Yisrael to shake off the chains of galut and prepare for the grand finale of world history to be led by the Jewish nation.