Coronavirus and the Jewish problem

In Tractate Yoma 5b, the Talmud points out a contradiction regarding the sanctified priestly garments. In parasha Tetzaveh it appears that Aharon with his eight garments and each of his sons with their respective four garments, donned their priestly garb with the last piece of apparel, the Avnet (the waistband), put on simultaneously; whereas in Parashat Tzav (Book of Vayikra) it appears that only after Aharon donned all of his garments did his sons begin putting on theirs.

The Talmud concludes that, indeed, Aharon first finished donning his eight garments of the High Priest, and then his sons donned their four garments.

The manner in which the Kohanim dressed has implications not only for reconciling the seeming contradiction between the verses, but even for the very act of Kohanic sanctity. If Aharon dressed first, it would imply that the priesthood began with Aharon, and from Aharon it emanated to his sons. However, if they dressed together, the significance is that Aharon and his sons merited the Kehuna with equal sanctity, with Aharon serving as High Priest as first among equals.

And indeed, the conclusion is that Aharon dressed and was consecrated first, and his sons drew their priestly status from him. For that reason, when the Kohanim ascend to bestow the priestly blessing, they say, “Blessed are You… who sanctified us with Aharon’s sanctity and commanded us to bless His people Israel lovingly”.

From the manner in which HaShem relates to the Kohanic family we learn how the Creator relates to mankind in general. When at Mount Sinai HaShem chose the Jewish nation from the other 70 root nations and races, we did not receive the status of first among equals, but rather we attained an unprecedented, irreversible uniqueness unmatched by any other peoples in the world. By this status the Creator relates only to his chosen nation and through us to the nine billion individuals who comprise the rest of humanity. Just as the sun is the center of our planetary system; the center of our human world is the Jewish nation around which revolves all the other peoples on the planet. As in the words of Chazal: the world was created only for the Jewish nation and our relationship with the Creator is as a king to his subjects and as a father to his children.

Three strikes and you’re out!

In Bereishiet chapter 12, due to a devastating drought and subsequent famine that fell upon the land, Avraham took his family and possessions and descended to Egypt. Rashi explains that the famine was a test of Avraham’s faith in HaShem’s promise to guard him. Ramban states that Avraham failed the test by leaving the holy land.

There were at the time tens or perhaps hundreds of thousands of Canaanites living in the land, so according to Rashi, Ramban and others, HaShem brought upon all these ”innocent” people the ravages of starvation in order to test the faith of one Jew.

As I read about the pandemic now facing the planet, it comes to mind that perhaps it is HaShem again sending a message to the Jewish people, even at the expense of economic, social and health issues of “innocent” bystanders. But be that as it may, the fact is that it is a shocking wake-up experience for many Jews in the galut. 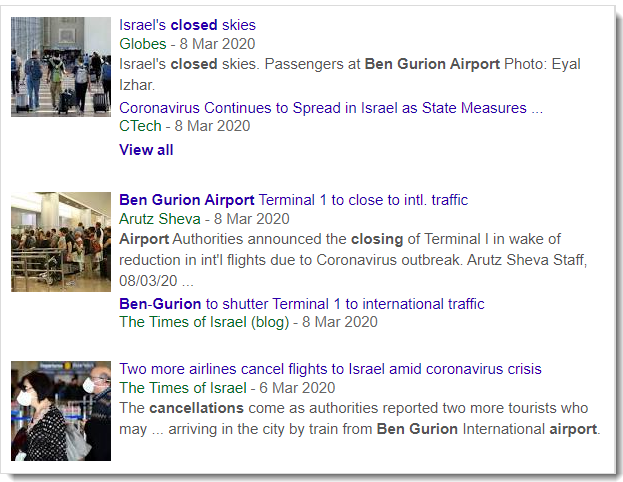 The unthinkable has happened. Jews in the galut believe that the doors of Israel will always be open to them if the time comes when they will have to close their shuls and yeshivas, lock their homes, pack their bags and come home. Today many Jews had plans to visit the holy land for Pesach or to see their children or just to breathe a little Yiddishe nachas in the Jewish homeland. However, the gates are now closed. There are almost no airlines that land here and whoever comes is placed in a 14-day quarantine. Airlines including El Al are inundated with ticket cancellations, and the sign on the sky over Tel Aviv reads “Closed for The Duration”.

Corona will pass some day after taking its deathly toll. But the Jews in galut must beware not to forget the feeling of helplessness when they were not welcome to the holy land.

It’s just a question of time when the Jews in galut will be facing their moment of truth. It will come about when the atmosphere of antisemitism will be so pervasive that there will be no choice but to return to Eretz Yisrael. The Jews will crowd the Israeli consulates in various cities to register for aliyah. But they will find large notices announcing Israel’s inability to absorb so many people, and aliyah to the holy land will cease.

Is this the message HaShem planned when sending this pandemic? Who can know? But the fact is, that there is a feeling of despair among many Jews who now find the gates to Israel sealed.

HaShem does not punish without forewarning the sinner. Anti-Semitic incidents are warning number one. The inability to enter Eretz Yisrael is the second warning. But three strikes and you’re out!