Our Minister of Agriculture Uri Ariel said in an interview last week, that the huge intermarriage rate of 70-80 percent of Jews in the USA is a Shoah – a holocaust. He was criticized on the grounds that nothing can be compared to the Shoah that was orchestrated and implemented by Germany and its allies in World War Two.

Although the two views appear to be contradictory – the intermarriage rate is a Shoah vs. nothing can be compared to the Shoah – the Minister is correct. I will explain.

Our parasha enumerates women who a kohen is prohibited from marrying; and if a kohen and one of the prohibited women would produce an off-spring, it would be deprived of the sanctity of Kehuna. This deprivation continues through the generations, such that the kohen who sinned invalidates his descendants even after the kohen’s death; or to put it simply, the sinning kohen invalidates his offspring even from the grave.

There are numerous sources that on Rosh Hashana HaShem, as it would be, has two books open before Him – the book of those who are alive and the book of those who have already passed on. Why does the Judge of mankind relate to the actions of the dead when they can no longer perform mitzvot or sins?

Answer: Because death is not as final as one would believe. The actions of man during his life, can even after death continue to influence the world, as in the case of the kohen who married in sin continues to invalidate his offspring from the grave, until the end of time. So, every year HaShem recalculates the status of the souls in the next world.

Intermarriage is a continuation of the Shoah 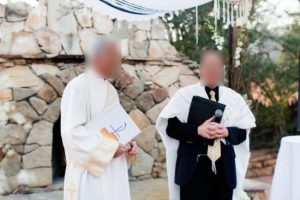 To return to the matter of intermarriage in the U.S. The tragedy of intermarriage is not a separate phenomenon that can or cannot be compared to the Shoah of Hitler, Himmler, Goering, Eichmann and Goebbels; rather it is a continuation of the Nazi Shoah. The Nazi leadership continues to exterminate the Jewish nation even from the grave through assimilation.

The Shoah so weakened the connection of many Jews to Judaism with the question “where was God and how could He have permitted this to happen if we are indeed His chosen people?” And in the absence of answers began the escape from the “stain” of being born a Jew.

Minister Ariel is correct in seeing the state of Jewry in the US as a continuation of the Shoah.

The awful truth that has to be articulated is that the Nazi leaders have intentional or unintentional allies in the form of Jewish leaders who do not cry out against intermarriage and passively condone the misguided actions of millions of Jews who cut themselves off from our 3500 years of traditional Judaism.

It would be disastrous to wake up one day and discover that your father was Eichmann; but it is equally disastrous to realize that so many Jews – perhaps even 6 million – have left Judaism in the last 75 years because of lack of Jewish education, including non-identity with the greatest miracle the Jewish people have merited in 2000 years.

It is a fact that Shabbat and the other mitzvot have little or no effect on the young generation of American Jews who are not observant. The only way to save what there is, is through Jewish pride.

The identity crisis with Jewish history and the disregard of the unprecedented return to Eretz Yisrael, our homeland, rests not only on the shoulders of the Reform and Conservative movements; it is the partnership that certain Chareidi elements have with them in the matter of divesting their educational programs of the miraculous Godly intervention with the establishment of Medinat Yisrael.

There is a REAL Shoah occurring right now, even if we cannot see the smoke rising from the chimneys.

The only hope is to reconnect whoever is left, to the miraculous State of Israel.