A small, but meaningful, incident in the lives of John and Mary Smith. The happy couple was out driving in the family car; John was behind the wheel and Mary sat near the window. Mary calls out to her loving husband, “John, when we were first married, we sat so close. Now look at us.” And John replied, “I didn’t move.”

The Reform and other breakaway splinter groups (no matter their numbers) are clamoring for Israeli recognition of their betrayal of the Torah, and 3300 years of Jewish history, as HaShem’s chosen people. The reason for this has nothing to do with God or with spirituality, but just real “down to earth” American values – money.

Assimilation has reached uncontrollable proportions. With over 70% of non-orthodox intermarrying, reform temple attendance decreases, and accordingly the financial contributions which are the life-blood of their movement. These breakaway movements grasp at any straw that might give them a raison d’etre, including any kind of recognition by official Israel. As the adage goes, “It’s the money st…d – the money”. 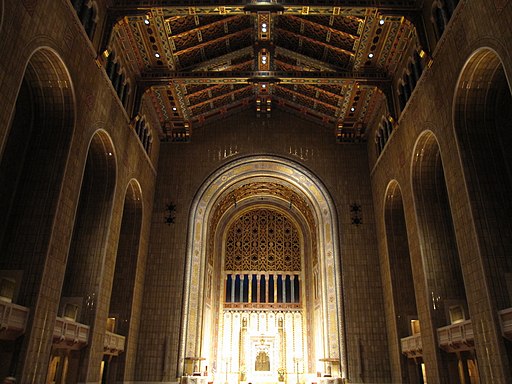 Inside Temple Emanu-El of New York, the largest Reform synagogue in the world

Two decisions made this week by the Israeli government will affect the unaffiliated, Conservative and Reform Jewish Americans (as apart from American Jews) who have discarded our 3300-year Torah life in order to be accepted by their gentile friends. Several years ago, I read a study made among Reform “rabbis”. It concluded that the vast majority don’t believe that there is a God – and forget about revelation at Sinai and the 613 mitzvot.

The first decision preserves the status quo at the Kotel, where there is one praying area for men and the other for women, with no specified area for any form of mixed gender services.

The other decision retains responsibility for conversions solely in the authority of Israel’s Chief Rabbinate, eliminating any legal and official recognition of private conversions. The individual will not be registered as a Jew in the rabbinical registry, nor by the Ministry of the Interior in terms of Israeli citizenship according to the Law of Return which grants immediate citizenship on any Jew who requests it.

Critics of the government’s decisions claim that they will create a schism between the Jews in the galut and us in Eretz Yisrael.

They are correct. The children of a gentile mother, even if the father is Jewish, will have to undergo conversion in Israel or by a rabbi abroad who is recognized by our Chief Rabbinate, where the initial condition is the acceptance of the Halacha in one’s private life. This is a non-starter for the millions of non-Orthodox Jews.

As a Jew who is committed until death to the 3300-year-old Jewish religion, I view our relationship with the Reform and others as part of a larger picture.

For 32 years, I was the rabbi of the Chazon Yechezkel Bet Knesset in the so-called “Moslem Quarter” of the Old City. The bet knesset was situated on the corner of Via Dolorosa and Guy street that leads from the Kotel plaza to the Damascus Gate. Guy street is totally Moslem regarding residents, aroma, decorations, etc. The Via Dolorosa, on the other hand, is totally Christian. How symbolic that our bet knesset, which represents authentic monotheistic Judaism, gave rise to the two false movements of Islam and Christianity. It can be likened to a powerfully flowing river that produces secondary streams destined to dry up and disappear, while historical Torah Judaism as the central unstoppable flow of God’s chosen people has given forth over the centuries peripheral pseudo-religious movements which do their damage and leave a temporary scar on the Jewish people.

The unaffiliated, the Reform and the Conservative movements, are not spiritual movements but rather foreign, intrusive elements in the healthy organism of historic, sanctified Judaism, which will be expelled from its midst by our sanctified immune system.

Where are the Eirev Rav today?

A great heap of wood shavings mixed together with steel shavings. You are required to separate the two by utilizing three methods: A powerful wind that removes the lighter wood, a fire that burns the wood leaving only the steel bits, and a magnet that draws out the steel.

The Mechilta (Midrash halacha on the book of Shemot) on parshat Bo records a discussion regarding the number of “Eirev Rav” (mixed multitude) that went out of Egypt with the Jewish people. Rabbi Yishmael claimed there were 1,200,000 and Rabbi Akiva claimed the number was twice that at 2,400,000. These numbers are staggering when taking into account that the number of male Jews from age twenty to sixty numbered only 603,550.

Where are the Eiruv Rav today?

Unfortunately, they are not identifiable, but they continue to misguide the inherently holy Jewish nation to compromise and pervert the Torah in word and spirit.

From the time that Moshe Rabbeinu permitted the Eirev Rav to accompany the Jewish nation at the exodus, the three processes of wind, fire and magnet have been in effect. The strong winds of assimilation have removed countless numbers of Eirev Rav, far more numerous than those who were murdered for being Jews. This process is being accelerated in our time through the Conservative and Reform movements.

During the darkest times in world history, the second process of fire was used by Christians and Moslems to decimate millions of Jews. And even though many pure and righteous tzaddikim were also murdered, the Gemara in Tractate Bava Kama states that when the heavenly decree is implemented in a specific place, all those who are there – righteous or not – fall victims.

The third method of the magnet powerfully attracts the authentic Jewish soul to return to Eretz Yisrael to live, while leaving the others to disappear over time in the galut.

Medinat Yisrael does not have the ability to decrease the huge percentage of intermarriage, which today is 70% and will reach 90% among the non-Orthodox in the galut. It is part of the natural process of weeding out negative elements from our nation.

We have to reach out to those Orthodox Jews in the galut who are victims of misguided teachers who claim that only the Mashiach can bring about the final redemption.

Our responsibility to members of the Reform and Conservative movements are likened to A who weighs 120 kilograms and is attempting suicide by jumping off the roof, while he is being held up from falling by B who weighs only 50 kilograms. If B continues to hold A, they will both go over the ledge. In order to survive, B has to let go.

By entertaining these breakaway groups in the name of egalitarianism, the State of Israel will find itself on a slippery slope where all Jewish values will be denied; and without Jewish values, the State will not be able to exist.