17) When Pharaoh sent out the (Jewish) nation, HaShem did not lead them on the road through the Philistine country, though it was shorter. For HaShem said, “If they face war, they might renege and return to Egypt.”

18) And HaShem led the people by way of the desert road toward the Red Sea. And the Israelites went up (Chamushim) out of Egypt. 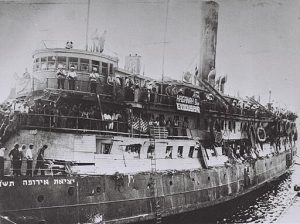 The Exodus 1947 after British takeover

I once saw a gripping TV documentary on the horrendous experience of the survivors of the Shoah (Holocaust) on the refugee ship Exodus. The more I saw, the more I became gripped with an overriding awe for the tenacity and determination of the 4500 survivors of the concentration camps, as they fought off frustration after frustration in their efforts to reach the shores of Eretz Yisrael. The group included men, women, children and babies. They had to fight off hunger pangs, sickness, death and the ever-present chances of detection and return to the hell of the refugee camps of Europe.

Their odyssey began when agents of the Mossad clandestinely smuggled them out of various camps in Germany. They were put onto trucks and smuggled into a port on the French coast on the Mediterranean. There they boarded a rickety ship re-named “The Exodus” for the voyage to Eretz Yisrael. The French authorities prohibited them from sailing, but the captain raised anchor and left the port without help of a tugboat or navigator; nearly sinking the ship on several sandbanks. The passengers were so tightly packed together that room and air became luxury commodities.

As they entered the open sea, six British Navy vessels were on hand to follow them at very close range in order to prevent them from reaching the shores of the Holy Land, which was under the British Mandate at the time. 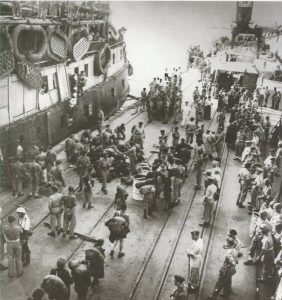 The Exodus docked in Haifa 1947

When the overloaded, listing ship left international waters and entered the sea space of Eretz Yisrael, two destroyers closed in on both sides of the Exodus, ramming it time and again, killing several of the Jews. The suffering was horrendous. The British boarded the ship and brought it to Haifa harbor where the refugees were transferred “half dead” onto three British ships for their return to Hamburg, Germany.

It is beyond my ability to describe the suffering and drama that these people had to endure. I was overwhelmed with the question: where did they get the tenacity, perseverance and endurance to overcome all that had befallen them day after day in their impossible efforts against ‘His Majesty’s Royal Navy’ to reach Eretz Yisrael?

Obviously, it was their desire to escape the terrible existence in the refugee camps of Europe, and certainly their need to escape being with the goyim who had made soap of their families. But there must be a deeper explanation of their incredible tenacity against all odds.

The answer lies with HaShem’s psychological make-up of His chosen people. In parashat Ki Tisa (Shemot 32:9), in the wake of the Jews’ worshipping the Golden Calf just 40 days after receiving the Torah at Mount Sinai, HaShem tells Moshe that the Jewish people have a nature of am keshay oref – a stiff-necked stubborn, contrary, ornery people.

O Lord, if I have found favor in your eyes,” he said, “then let the Lord go with us. Although this is a stiff-necked people, forgive our wickedness and our sin, and take us as Your inheritance.”

When HaShem opened the gates of Egypt eighty percent refused to leave and died there.

Moshe informed the nation that they were about to enter the Holy Land, but the scouts argued against it and the people refused to enter. But when Moshe informed the “refusers” that now HaShem would prohibit them from entering, they organized a private army to conquer the land, and they all died.

When HaShem told the Jews to conquer all of the land at the time of Yehoshua, they tried but failed to complete the assignment.

When the Emperor Darius of Persia opened the way to rebuild the second Temple, Ezra succeeded in bringing a mere 42,000 Jews. But when the Samaritans of Shechem tried to block our efforts, the Jews rallied and rebuilt the wall around Yerushalayim and the Temple.

At the onset of Moshe’s mission to the Children of Israel, he is commanded by HaShem to deliver the following message (Shemot 6:5-8)

Moreover, I have heard the cries of the Children of Israel, whom the Egyptians are enslaving, and I have remembered my covenant.

Therefore, say to the Children of Israel: “I am the LORD, and I will bring you out from under the yoke of the Egyptians. I will free you from being slaves to them, and I will redeem you with an outstretched arm and with mighty acts of judgment.

I will take you as my own people, and I will be your HaShem. Then you will know that I am the LORD your God, who brought you out from under the yoke of the Egyptians.

And I will bring you to the land I swore with uplifted hand to give to Abraham, to Isaac and to Jacob. I will give it to you as a possession. I am the LORD.”

The accepted understanding of the five uplifting messages of HaShem: “I will bring you out… I will free you… I will redeem you… I will take you as my own people… I will bring you to the land,” is the long-awaited promise of freedom from Egyptian bondage.

However, I understand these statements not as compassionate promises, but statements of intent that HaShem would perform for Am Yisrael, regardless of their personal preferences.

I will bring you out – of Egypt even if you do not want to leave.

I will free you – even if you prefer to remain slaves.

I will redeem you – even if you fear freedom.

I will take you as my own people – even if you will refuse to be my chosen people.

I will bring you to the land – even if you prefer to remain in galut.

There is a defect in our personalities, like a scratch on a record that keeps repeating itself with every turn of history. The fantastic tenacity of the refugees on the Exodus and other ships to reach these hallowed shores was, in no small part, the reaction of the prohibition of coming here. Had the British opened the gates to the Holy Land, I would venture to say that many would not have come.

Every Jew in the Soviet Union dreamt about coming to Eretz Yisrael, but when the gates were opened, tens of thousands made their way instead to the Unites States and to Germany.

The Jews of the United States will never come here as long as we beg them to come.

The offer of free transportation and the lifting of import taxes on all their personal property will induce very few Jews from Brooklyn or Chicago to come.

Were it in my power, I would cancel all perks, and, in addition, institute a quota on the number of Jews permitted to come on aliya from the USA. The result would be long lines forming in front of the Aliya Department offices in the major cities of the USA, with screaming signs saying, “No one can tell me I can’t come home.”

Let someone say that I am wrong. Because this is what we were and still are a “stiff-necked” stubborn people, who give forth our sweetest fruit only under adverse, distressful and unhappy conditions.

In generations to come, students of Jewish history will be racking their brains to understand how the Jews and their religious leaders remained in galut when the gates of Eretz Yisrael were thrown wide open by Medinat Yisrael. The smart, erudite among them will publish doctorates proving that all the religious Jews returned to Eretz Yisrael, because it is sheer insanity to think that religious Jews, and certainly not rabbis, could have remained in self-imposed exile after the Shoah when Rachel our mother was beckoning for her children to return. (Yirmiyahu, chap. 32)

This understanding of our “unique” nature comes through very subtlety in the second chapter of Birkat Hamazon (grace after meals), which was authored by Yehoshua bin Nun. The chapter lists six concepts for which we offer gratitude to HaShem: Eretz Yisrael; freedom from Egyptian bondage; brit milah; the Torah; life itself; and the food which sustains our physical existence.

These six share a common denominator. They are all the will of HaShem which was forced upon the Jewish people against our collective will; but each proved to be for our eventual good.

We choose the path of least resistance, but HaShem intervenes in our lives and forcibly points us in the right direction. We build our lives on false hopes, and eventually find ourselves disappointed with many of the things we have done in life.

The second chapter of Birkat Hamazon is telling us that all the ultimate good things in our lives are from HaShem and mostly against our will.

At this juncture in our history, I would suggest that, together with our prayers for the speedy appearance of the Mashiach, we add a small prayer that HaShem should bless us that we become a “normal” people.