How does one say goodbye to the Wall?

Of all human frailties, the one most likely to cause us grief and suffering is our compulsion for great expectations. (Charles Dickens, in 1860, authored a book of that name, tracing the life story of the orphan Pip and his attempts to become a gentleman).

The greater one’s ability to envision and project, the greater his capacity to expect and to become overwhelmed with disappointment. It occurs in one’s professional life when the “dream job” turns into a nightmare or when the idealization of a future blissful life with one’s “soulmate” turns into “sourmate”.

Can we find a similar phenomenon in the spiritual world? Does HaShem react as would a disappointed person? Are there unfulfilled great expectations in our relationship with the Creator when we fail miserably in His eyes?

At the end of parashat Bereishiet, the Torah relates HaShem’s disappointment with the human race which He had created (Bereishiet 6:6-7):

The LORD was grieved that He had made man on the earth, and His heart was filled with pain. So the LORD said, “I will wipe out mankind, whom I have created, from the face of the earth — from men to creatures that move along the ground, and birds of the air—for I am grieved that I have made them”.

In the book of Bamidbar (parashat Ma’sai) 42 camping sites are recorded during the 40-year trek of our forefathers in the desert. The original plan was to bring the Jewish nation into Eretz Yisrael in only 11 days after the exodus. However, our rebellious conduct caused disappointment in the heavens, and the rest is sad history.

We, in Eretz Yisrael, expected that the establishment of an independent Jewish State would create a tidal wave of religious Jews eager to continue our religious-national life, so abruptly cut off 2000 years ago with the destruction of the Bet Hamikdash. Little did we realize how deep the galut was imbedded in our consciousness.

The knowledge that we were now the masters of our fate, no longer under the “protection” of the Czar, the King, or the President, loomed too large for the dwindled, shriveled feelings of inferiority that the galut had inflicted upon our once proud self-esteem as God’s chosen people. Most of those who did come were escapees from intolerant societies. Relatively few have come from the free countries of the world.

Religious Jews in the galut were also disappointed. They expected that the chalutzim, who were for the most part non-observant people who did not say “Shema Yisrael” when they were dying from draining the malarial swamps or when fighting off the Arab murderers, would suddenly throw away their hoes and plows and become the new Chafetz Chaim or Chazon Ish when the Medina was declared. That didn’t happen.

So, the stage was set for many religious leaders in the galut to rant at the “goyishness” of the Jewish State, and hence the necessity of remaining in the galut and building all the trappings of Jewish life there. So, the Jews replaced Be’er Sheva with Dallas, and Tel Aviv with Denver, and Ashdod with Monsey to serve as the new Jerusalems until the Mashiach would send limos to bring them home.

Chabad houses dot the Jewish-American landscape, as well as kollels, day schools, shatnez laboratories, ritual baths, and sheitel (wigs) sprucing shops. You name it – it’s all there for your religious convenience.

All this, plus the added incentive that their sons would be able to sleep every night between two clean sheets without the “inconvenience ” of having to serve in the army.

Parashat Mas’ai records the places where the Jews encamped. Just to quote a few:

They left Elim and camped by the Red Sea.

They left the Red Sea and camped in the Desert of Sin.

They left the Desert of Sin and camped at Dophkah.

They left Dophkah and camped at Alush.

They left Alush and camped at Rephidim, where there was no water for the people to drink.

They left Rephidim and camped in the Desert of Sinai.

They left the Desert of Sinai and camped at Kibroth Hattaavah.

It reminds me of the present-day tourists (before Corona).

Then comes the emotional moment of parting which usually occurs at the Kotel.

They come in all sizes and shapes, complexions, and complexes, in fusion and confusion, from East and West and North and South. They are Jews; they are tourists; they come to see it. The Wall.

They come with familiarity (some having been to Israel seven, eight, ten times), having reached the rank of resident tourist. Usually these are Orthodox Jews who come up to the Wall with confident strides as if to shake the hand of a familiar acquaintance. Others are not sure just what they have to do, how they are required to act, and they stand uncomfortably and nervously, glancing about to see what the others are doing. Still others stand, just stand before the Wall – thinking, meditating, praying, talking, whispering, weeping. And then they leave.

They have been to the Land, been to Zion, been to Jerusalem, the Holy City, and been to see it. And then they leave.

They leave behind their money, their tour guides, their little notes they wrapped into a small ball or wad and left in the crevices of the Wall. They leave the Land and Zion and Jerusalem, the Holy City, and the Wall. They go back to Great Neck and Boston and Los Angeles and Miami and, of course, Washington Heights and Monsey and Williamsburg and Boro Park.

They leave Old Jerusalem for newer ones and the Wall for Wall Street because they must. To see Israel is to enjoy an experience beyond comparison. To see Jerusalem, the Holy City, is to gather a treasury of memories beyond price. To see the Wall is to experience a thrill that is indescribable. But everything has its time and its place, and all good tours must come to an end. Israel is the finest of all places to visit, but it is not for them to live there. And so, they leave.

The beards and the beardless, the Orthodox (ultra and modern), Conservative, Reform, Reconstructionist, Humanist, agnostic, atheist … They leave. For “home.” And I often wonder: When they came, they ran to say hello to the Wall. When they leave, how does one say goodbye to the Wall?

What does one say to It? Does one stand there and daven Mincha, pray the Afternoon service that says: “And may our eyes behold Thy return to Zion … ” and then say to It: “Well, I suppose I have to go now. The business can’t shut down for more than three weeks. Take care of yourself and let’s hope that I return soon”.

If one knows that the Shechina, the Divine Presence, never left the Wall, how does one say goodbye to Him?

Surely, this last remnant of the Temple, in which preached the Prophets who inveighed against hypocrisy, remembers their words and repeats them to their descendants. Surely it repeats the words: “When ye come to appear before Me, who hath required this at your hand to trample my courts? Bring no more vain oblations, it is an offering of abomination unto Me; New Moon and Sabbath, the holding of convocations – I cannot endure iniquity along with the solemn assembly … ” (Isaiah 1: 12)

The Wall looks at those who come to honor It and at that very moment plan to betray the Land and abominate it by leaving for an Exile they call “home” – and repeats: “Behold to obey is better than sacrifice, and to hearken than the fat of rams” (Samuel 1, 15:22). They leave the Wall for “home.” They refuse to dwell in the Land of this Wall. It knows that which they plan – peace and security in the Galut – will never be. It knows that if they reject the Wall of the Almighty, that there will be other walls for them: walls of fire and walls of prisons and camps. The Galut is one huge wall for the Jew – though he refuses to see it.

If one comes to the Wall late, very late at night and listens carefully, very carefully, he can hear the Wall. It weeps softly to itself and says: “Woe unto my people for their humiliation of the Land…” And it seems to me that the Wall would prefer that those who say goodbye to it, would not bid it hello. 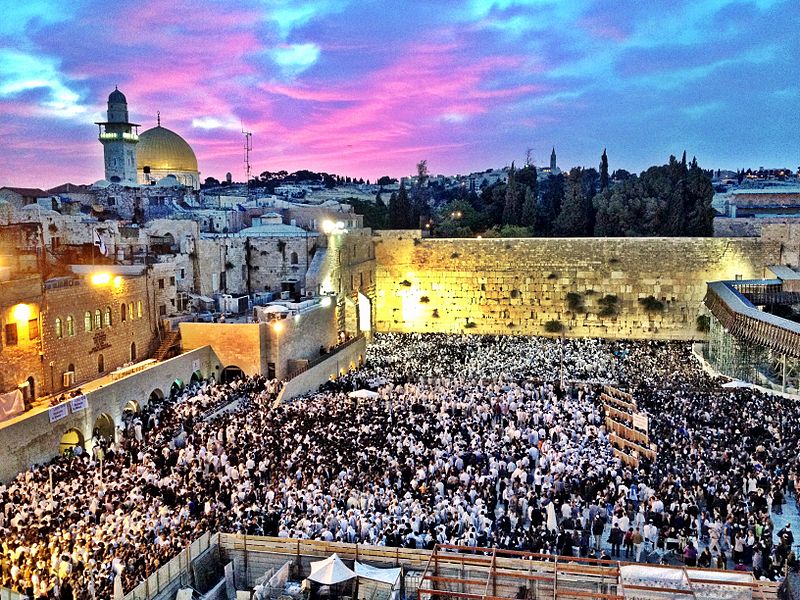 I have often stated that there is uneven distribution of historic responsibility in our generation, when so much of the future history of Am Yisrael is being carried on the shoulders of the few who are living Eretz Yisrael.

But the truth is that it was always that way. The cry of Moshe Rabbeinu when he saw the Jews reveling before the Golden Calf, “Mi LaShem Ailei” – whoever is for God, let him come forth to me – reverberates throughout the generations. It was always the dedicated few who ensured the survival of our people by their willingness for self-sacrifice.

The others can draw strength from the great English poet John Milton (1608-74) who wrote in his poem entitled On His Blindness:

“When I consider how my light is spent Ere half my days in this dark world and wide… They also serve who only stand and wait“.

At this time there are no tourists saying hello to the Kotel, nor are there any who bid it goodbye; in fact, there are almost no tourists at all in the country. Is HaShem telling us through the pandemic that he does not want Jewish tourists to enter his home?

Is HaShem reminding us that the covenant He made with our forefathers is an “all or nothing” deal?

The term “Jewish tourist” in Eretz Yisrael is a classic oxymoron.

As we draw closer to the final days of galut, the winnowing out of those who are tourists to Judaism will enter into high gear.

Moshe Rabbeinu called out at the episode of the golden calf:

Whoever is with HaShem come to me.

That call is now reaching a high pitch; happy is the man or woman who hears it and responds to it.

Be Healthy Be Careful Be Here