The Profound Meaning of the American Embassy’s move to Yerushalayim

Between the years 1970-72, I served as the Assistant to the Minister for Religious Affairs of the State of Israel, Rabbi Dr. Zerach Warhaftig ob”m.

It was a very interesting and enlightening period in my life, as I witnessed the inner workings of our government and met the movers and shakers of the Medina. In this position, I was privileged to make my small contribution to the national effort.

It was that period of time right after the Six Day War when the government relegated the task of restoring the plaza area adjacent to the Kotel to the Minister for Religious Affairs.

Rabbi Warhaftig published a public tender to architects to present their ideas for the Kotel plaza. After several months, five world-renowned architects met in his office to present their suggestions. Also present were the general director of the ministry, others and me as the minister’s assistant.

Each presented their interesting and original concepts, but I saw that the minister was not impressed by any of them.

When everyone had finished, I requested permission to present my idea for the entrance to the plaza.

I said that 2000 years ago, the Roman general Titus destroyed the Holy Temple, exiled the Jews and organized a mammoth military parade in Rome. In the parade, he exhibited the Jewish captives and also many of the vessels he took from the Temple. Titus then gave the order to construct the famous, or infamous, “Arch of Titus” that stands to this day in Rome.

The arch has on it engravings of the downtrodden Jewish captives and vessels, and etched upon it are the words Judea Capta – Judah is Captive.

I said that the entrance to the Kotel plaza should be through an exact replica of the arch, but on it would be etched the words Judea Libra – Judah is Liberated.

This would bring some sort of closure to the tragic historical circle of our people, when there is not a single Roman left alive and we Jews are again sovereign over Yerushalayim. It could have been a great symbol of Aisav’s downfall in contrast to the eternal life of his brother Ya’akov.

I was disappointed that my “closure to a tragic historical circle” was rejected. But little did I know that HaShem had bigger and better plans for Aisav’s recognition of the spiritual supremacy of Ya’akov.

On the day of this writing, May 14, 2018 – exactly 70 years to the day that Medinat Yisrael was declared – the leader of the Aisavic western world, President Donald Trump, gave honor to the Jewish state by declaring before the world that the holy city of Yerushalayim is the capital of the Jewish nation forever.

The symbolic act performed by President Trump – and supported by tens of millions of fundamentalist Christians who are well versed in the Bible – was recognition by the descendants of Aisav that the Children of Yaakov are God’s chosen people and that the symbol of our bond with the Almighty is the city of Yerushalayim. 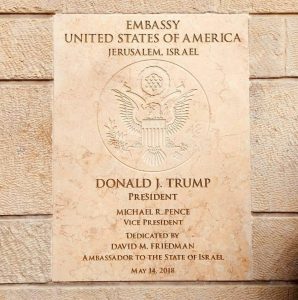 Deliverers will go up on Mount Zion to judge the mountains of Aisav.

And the kingdom will be the Lord’s.