1) HaShem spoke to Moshe in the the Sinai desert, from the Mishkan, on the first day of the second month (Iyar) of the second year after exiting Egypt.

2) “Take a census of the whole community of Israel according to their clans and families, listing every man by name, one by one.

3) All the men in Israel who are twenty years old or more and able to serve in the army, count them, you and Aaron.

4) And together with you shall be one man from each tribe, each of them the head of his tribe

17) Moses and Aaron took these men whose names had been specified
18) and they gathered the whole community on the first day of the second month, and the people registered their ancestry by their clans and families of these who were twenty years old or more
19) as HaShem commanded Moshe. And so he counted them in the Desert of Sinai

We can only imagine the exhilaration of each person while standing individually before Moshe, Aharon and the 12 tribal heads of Israel, when after the inquiry he received the acknowledgment that he was a bona fide, authentic son of Am Yisrael. Standing face to face with HaShem’s messengers to the world, who spoke to each individual and blessed him with a hand shake and a kiss, was a far greater emotional thrill than receiving the Congressional Medal of Honor or even being accepted to Cooperstown’s baseball Hall of Fame.

After such an experience, no one could feel that he was just another “face in the crowd,” just one more anonymous former slave freed in the rush to leave. He was now a totally committed and recognized son of Israel, who presence was appreciated and respected.

About a week or two ago, the OU (Orthodox Union) sponsored its annual Jewish Communities Fair at Manhattan’s Metropolitan Pavilion. Over 1000 people were there in search of new communities in places like Milwaukee, Wisconsin; Jacksonville, Florida and Louisville, Kentucky; Southfield, Michigan and Chesterfield, Missouri. There was no booth showing the possibilities of living in Eretz Yisrael. The OU sponsors made it clear that they were interested in supporting the American scene.

People were searching for affordability in the form of cheaper housing and cheaper education, and a high quality of life at an affordable price. There were communities who gave incentives like a $20,000 gift for a down-payment on a home, and free tuition.

From a religious Zionist point of view, such as mine, there are many sad aspects to this happening, but I wish to concentrate on one particular facet which is not only sad – it borders on the tragic.

Once you have put your down payment of the house of your dreams in Jacksonville, Florida; Southfield, Michigan or Chesterfield, Missouri or any of the 40 other offerings at the fair, you will have condemned yourself and your children to a life of dull, insignificant,undistinguished, uninspired mediocrity. You will get your home, your cheap education and that warm, fluffy feeling of living in a close knit orthodox community, but the price… the price.

But there is a flaw in what I have stated above. The sad fact is that a life of dullness, insignificance, and an undistinguished, uninspiring existence is not limited to the small shtetlach of America’s hinterland – they are present even in the great metropolises from New York to L.A.

You will make money, but as the clock ticks into middle age and beyond, there will appear that gnawing feeling from deep down of, “What have I done with the years HaShem has given me?”But by then it will already be too late. Another life vanished in anonymity. 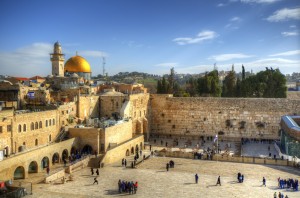 In Eretz Yisrael the reverse is true. You might not get the big house like in Chesterfield, Missouri and the dollar symbol will change to a shekel, but here you will leave your anonymity behind. Just like each Jew who stood before Moshe, Aharon and the 12 tribal leaders and attained his individuality as a full fledged member of Am Yisrael, when you live in Eretz Yisrael,no matter what you do, you are an important partner with HaShem in the rebuilding of His people’s future in the Holy Land.

Here HaShem relates to you by name; one is not like a drop in a cloud as the individual is in chutz la’aretz.

The difference can be illustrated as follows.

Last night, my wife and I were at a concert in honor of the of the Israel Philharmonic Orchestra in honor of the 46th anniversary of the re-unification of the Holy City.

The music was beautiful, as was the ambiance and the feeling of a common destiny and zechut (merit) among all of us to have been chosen by HaShem to live in Yerushalayim.

During a concert one’s eyes pass from musician to musician. From the string instruments which are close to the conductor, to the brass and keyboard instruments, from there to the percussion and woodwinds. After an hour of this, one begins to acquire a sense of closeness to each musician, by recognizing how he or she sits, and their agility and alertness. I imagine that one who has a season’s ticket to the symphony increases his feeling of intimacy with the genius of each artist.

However if one would sit in the concert hall but not see the artists, he would hear the same music but would not connect with the artists.

is telling us that HaShem hears and sees the music of our Torah life in Eretz Yisrael, day by day, minute by minute, artist by artist – every man, woman and child in a very personal way. With the implication that the music of Jewish life in the galut reaches the heavens but the “eyes of the Lord your God are not continually on you”.

The two paths are very clear: a life of partnership with our Father in Heaven and the feeling of being part of the eternal history of the Jewish nation, or a life of dull, insignificant,undistinguished, uninspired mediocrity.